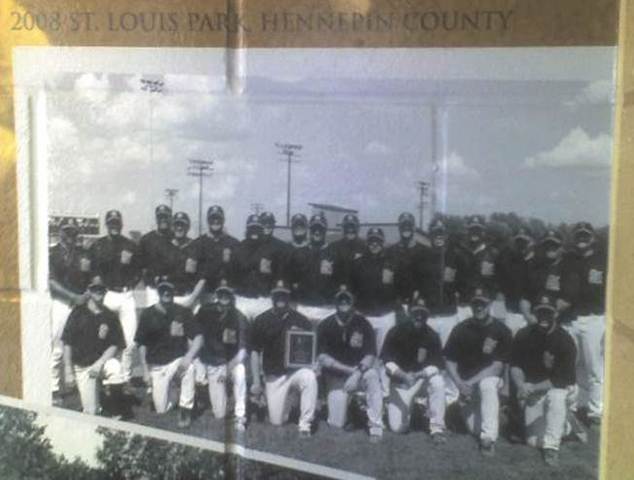 The St. Louis Park men's amateur baseball team was established in 1989.  Although a team had played in St. Louis Park before, the community had been several years without before Matt Colford formed the team again.  The Park Team is one of as many as twelve teams competing in the Riverview League.

The Riverview League is one of three Class A Leagues structured within the state sanctioned under the Minnesota Baseball Association (MBA), and can easily brag as being one of the top, if not the best league in the state.   Certainly within Class A.  The Team won its first Class A State Tournament in 2002 and its second Championship in 2008, joining only the Minneapolis Angels (3) and Minnetonka Millers (10) as the only multi-champion Class A teams.  The Team finished Runner-Up in 1992 to the Minneapolis Angels, and then three consecutive years of 1997 - 1999 to league rival, Minnetonka Millers.

With an additional runner-up to Wesley Homes (Albert's Gators) in 2005, St. Louis Park is tied for second place with five runner-up finishes within the MBA.  St. Louis Park also has one third place finish in 2006.

Durning the 1998 season the Park Town Team elected to use wood bats exclusively when it became obvious there was a danger in continuing to use  aluminum bats.  Since the beginning of the 1999 season, the team has only used wood bats or wood composite bats, even when advancing to the State Tournament.  Although in the past the competition nearly always swung aluminum bats, during the 2002 the entire state declared it would use wood or wood composite bats only for all in-state play.  Nearly all state players preferred it to aluminum during the 2002 season.

The wood bat transition for the St. Louis Park teams has been very rewarding for the players.   Although the power numbers are lower, batting averages have remained nearly the same; for some players, even higher.  The most significant difference from a player standpoint is in the enthusiasm and effort on the field.  We believe the use wood bats exclusively for all games will make them more evenly matched, more fun for the competitors, and more enjoyable for the spectators.

Please join us at our games, we play at Dakota Field in St. Louis Park, six blocks north of Minnetonka Boulevard on Dakota Avenue.